Renzer has new ambitions with Saban

David Renzer, one of the most experienced global music publishing executive, is back in an active role with a little help from 'Ninja Turtles' and assorted 'Power Rangers'. During the summer, the former chairman/CEO of Universal Music Publishing Group has joined Saban Capital Group, the private investment firm set up by media entrepreneur Haim Saban, as president of music ventures.

“I have been two months with the company and I am very pleased with how things develop,” said Renzer at the end of August, speaking to One Movement from his Saban offices in Los Angeles. “There is a serious commitment at Saban and I really enjoy being part of a team looking into new ventures.”

In his new role Renzer will oversee the group's music-related portfolio that he will be tasked to build from scratch. But he will not build it without ammo: He will rely on Saban's deep pockets and on Saban Brands, a division which exploits TV production properties such as children’s television shows like 'Power Rangers', among others. “We create new copyrights all the time,” said Renzer.

Renzer already knew Saban from his Universal days, as UMG was negotiating the acquisition on Univision's music assets, which included publishing catalogues. “Saban is run by one of the most successful media investors who also had a very successful and active career in the music industry,” said Renzer.

A native of Egypt, Saban immigrated to Israel at the age of 12 and in 1975 he moved to France where he created a successful record label. He relocated to the US in 1983 where he established a media group around such franchises as 'Teenage Mutant Ninja Turtles', and 'Mighty Morphin Power Rangers'. Saban sold its music publishing catalogue in 2010 to Bug Music, which was later acquired by BMG Rights Management.

Throughout all of his career, Renzer worked in music publishing – for Zomba, MCA and Universal – and was eager to continue to do so. Renzer left UMPG in 2011 after 15 years with the company with his position at UMPG was filled earlier this year by UMG COO Zach Horowitz, whom he used to report to. Renzer said he enjoyed a “very close relation” with Horowitz.

During the interview, he remained tight-lipped as to the reasons he departed from a company he grew into being the market leader after the acquisition of BMG Music Publishing. “Let me just say that I felt it was time for me to leave,” he answered when pressed to explain why he parted ways with UMPG. He then took a few months off to travel the world with his wife and started looking at new ventures and at ways to raise capital to invest in music publishing.

That's when serious discussions with Saban kicked in. Renzer welcomed the opportunity to have, again, an active role in the music publishing business. Most of all, he relished the idea of joining a group of people with an entrepreneurial spirit and money to invest. And the fact that he could have equity in the company was a good reason, too.

Renzer said he wanted to develop Saban's music publishing division as a “boutique publishing” unit. “Our vision is not to manage millions of copyrights,” he explained. Renzer said that he had already targeted a series of potential companies and assets and that he hoped to close deals within the next few months. “It is important to be capitalised but we will invest wisely in catalogues and writers,” he added, suggesting that Saban had the potential to invest “hundreds of millions of dollars” in new assets.

“We will make deals that are justified and we will be opportunistic and entrepreneurial,” he said about his investing strategy, which he sees as not too dissimilar from BMG Rights Management's: “If you look at BMG, you can say that they have been disciplined in terms of multiples and prices.”

The acquisitions will provide Renzer with the existing structure upon which he will build his operations. “Our goal is to be a full-service publishing company, with all the various departments necessary to be a serious player in the field,” said Renzer. “My main focus at the moment is to build the infrastructure.”

Renzer intends to develop a publishing business making the best of Saban's ties with the TV and film sector in Hollywood. “As we know this is one of the few areas where we can grow copyright – film and TV are really key to building publishing catalogues,” he explained.

Outside of the film/TV area, Renzer said he will have a close look at Latin music, production libraries and international. “It is fun to figure out what makes sense [to invest in],” smiled Renzer, but it was “a bit to early” to outline his international set up, which will also depend on the structure of the companies Saban will acquire. “All I can say is that we will have a combination of foreign offices and sub-publishing relationships,” he revealed.

Renzer accepts that it is not the best era to be in the music business, and that music publishing has also its own set of challenges. “Our industry has long term question marks as we go more into streaming. Plus, there's pressure on synch and performance income is challenged. That's why we will be very strategic in our investments,” he explained.

However, during the interview, Renzer sounded buoyant and genuinely excited about being back in business with such partners. “It reminds me of the days when I used to work for Zomba with an entrepreneurial and visionary executive. I really welcome this opportunity to continue to play an active role in this industry.”
Posted by Emmanuel Legrand at 6:17 PM No comments:

A new magazine for the music community 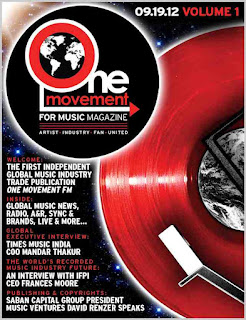 The first issue of One Movement for Music, a new B2B magazine for the global music community, is now available.

This free online publication is the brainchild of Musexpo organiser and founder of A&R Worldwide Sat Bisla and his team in Los Angeles.

In this first issue you will find interviews with IFPI CEO Frances Moore and with former UMPG chairman/CEO David Renzer and much much more.

I will be covering the music publishing business and copyright issues for OMFM.

We hope you will enjoy the reading.

The news of Hal David's death this Saturday at the age of 91 will sadden all those who like good songs and who have been enjoying his works, especially those he penned with his main partner in songwriting, Burt Bacharach. Together, they have certainly given the world more timeless songs than most, securing their place in the Pantheon of great songwriters.

In the world of lyricists, David was in a league of his own. His lyrics were apparently simple, but you could detect serious craftsmanship behind them because they would always fit perfectly the song. Words were meaningful but never pompous, and there was never a word in the wrong place. There was also a perfect combination between the lyrics and the melodies. It flowed without glitches.

David was also an activist on behalf of the songwriting community: in 1974 he joined the board of US authors' society ASCAP and eventually became its president from 1980 to 1986. With his ASCAP relentlessly walked the corridors of power in Washington, DC, representing the voices of thousands of songwriters. Unfortunately, he had been unable to attend earlier this year a reception in the honour of Burt Bacharach and himself at the White House, during which President Obama presented them with the GershwinPrize, recognising what Obama described as “two kings of songwriting”.

Last year, Hal David was celebrated at the ASCAP Awards in London. David was frail but was there in person, his wife always by his side, as he was receiving with good grace and modesty all the proofs of respect and, dare I say, love from the audience which consisted mostly of fellow songwriters.

He regaled the crowd with anecdotes of his first trip to the UK, straight out from the Brill Building, meeting the likes of Tom Jones, who was going to perform 'What's New, Pussycat?'. Even if he spent his career putting his words in other people's mouths, he came across as a great story teller and he received a well deserved standing ovation.

That evening, I was introduced to him by Karen Sherry from ASCAP. I congratulated him on his achievements and told him that his songs meant to all of us in the room. I could not resist telling him that we had at least one thing in common – our day of birth. He was very gracious and said that was a very good birth date! I could not disagree with him.

[Typed while listening to 'The Love Songs Of Burt Bacharach' (Universal)]
Posted by Emmanuel Legrand at 8:51 PM 1 comment: