Gadi Oron, Director General of the International Confederation of societies of Authors and Composers (CISAC) outlined a few of the “winds of change” that shape the agenda of the global organisation in his keynote address at the virtual Global Music Publishing Summit organised by theAssociation of Independent Music Publishers (AIMP).

Oron said he was convinced that rights societies will continue to play a central role to ensure that music creators are protected and remunerated, but also that the nature of their work will evolve because of changes in technologies. Noting that rights societies had been around for over a century and that they continue to perform, essentially, the same role as royalty collectors and distributors, but technologies "have changed the role of societies."

Looking at the music royalties flow, Oron explained that music accounted for just under $10 billion of the rights collected by CISAC's members in 2019, Overall, out of the 10bn, about $1.8bn are sent by societies to sister societies. Out of these $1.8bn dollars, Oron revealed that just over $700m US$ are sent to the US, which "means that almost 40% of all the money that is channeled through our network, sent by societies to sister societies, ends up in the US."

Oron also said that of the three main sources of revenues for the sector, TV and Radio broadcasting accounted for 37% of collections, Live and public performance for 29% and Digital for just under 23%. "The reality for us is that, at present, less than a quarter of overall royalties collected around the world come from digital services. And this figure is low," said Oron.

However, Oron pointed to "extremely positive developments in digital collections in some markets" such as  Mexico, Sweden, South Korea, Australia and Canada where half or almost half of the overall collections come from digital platforms.The growth of digital was especially notable during the Covid pandemic, he added, noting that "digital income has increased, almost everywhere." 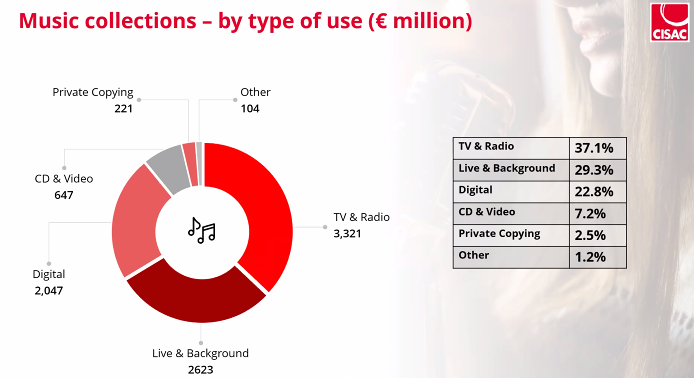 But the pandemic has also severely affected other streams of revenues, such as TV and Radio, due to a decline in advertising income for broadcasters, which immediately translated into cutbacks in the income collected by societies from broadcasting. The most affected stream of revenue was income from live and public performance, with royalties collected from live concerts, nightclubs, bars, restaurants and so on, expected to be down by around 80% in 2020.

"Obviously, subscription and video-on-demand services have seen extraordinary growth last year," said Oron, who added that while live streaming and hybrid concerts have become more and more widespread, he wondered if these new forms of monetisation would be game changers for the sector. "I’m not sure," he quipped. "It seems that songwriters will continue to rely on broadcasting, on public performance and on live concerts, as the key revenue streams. At least in the near future." 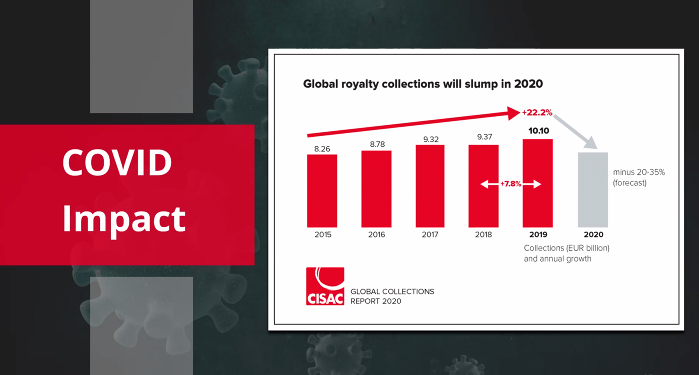 He also alluded to CISAC's lobbying actions, in particular on the issue of the value gap, or the transfer of value, which he described as "a campaign that’s effectively about increasing the digital pie, and about being able collect more royalties."

The Copyright Directive battle is not over yet

Oron said the five-year battle to get the issue addressed in the European Union's Copyright Directive did result in the Article 17. The Directive is on the verge of being implemented by EU member states, but Oron warned that while the Directive was finally adopted in April 2019, the "battle is not quite over yet."

He explained: "It has now moved to the local level and domestic implementation at EU member states, and there’s a strong push by the tech sector to dilute the Directive’s provisions. And we’re fighting that."

He added that because of the global nature of CISAC, the organisation is deploying its international network "to leverage this issue and we are trying to convince other governments to follow in the steps of the EU and adopt similar laws."

Another international campaign that CISAC is coordinating is concerns the practice of copyright buyouts, by which VoD platforms that produce content, like Netflix, offer to the creators buy out contracts. Composers who agree to buy-out contracts give away all their rights in exchange for a lump sum payment, which will deprive them from any future revenue from the exploitation of their work.

"This practice is allowed under US law and is very common in US productions," said Oron. "However, the legal situation outside the US is not the same. In many countries outside the US, this practice is not allowed, which is why, we see more and more cases where the law of California is mentioned as the law governing such contracts."

For Oron, there's no problem when it is a US production, filmed in the US, with American creators. "But if the TV series is produced in France, and the composer is French, and everything is French, why should the law of California govern the production and the transfer of rights?" asked Oron.

Structural changes in the landscape

So to better inform composers of this practice of buyouts, which has "grown substantially in recent years," CISAC launched an awareness raising campaign called Your Music Your Future International, modeled from a campaign started in the US by a group of composers. "We took it to the international level," said Oron. 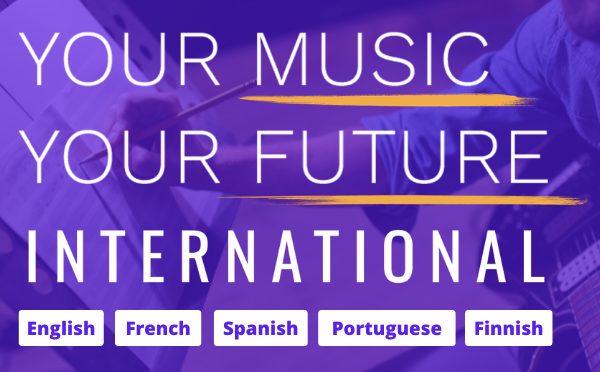 Oron also shared some thoughts about the future. "I think that we’re all witnessing major structural changes in our sector and in the music industry’s landscape," he said, listing some of these changes: the development of digital which is "pushing and forcing the whole sector to adapt"; a frenzy activity around music catalogues, selling "for prices that a few years ago were unimagined"; "fierce" competition in the rights management sector; third parties developing "technological tools that – in many cases – are superior to what the industry has."

"The task of collectively managing rights is becoming more expensive and requires more resources," he added, but at the same time, there’s "enormous pressure to cut costs and find efficiencies."

Artists more involved than ever

Last but not least, he noted that the artists and songwriters themselves "are becoming very vocal and much more involved than ever before. I can’t remember this happening at such a scale ever before."

Oron concluded by stating that he personally had "no doubt that the music sector will continue to grow probably phenomenally in the coming years. And I also have no doubt this will translate into a necessity to have more resources and more capacities in order to efficiently manage rights, especially for digital."

"What is clear and obvious is that it is the combination of strong rights, quality data and effective processing that holds the future for the rights management sector. These things must be achieved on a global level."

Posted by Emmanuel Legrand at 9:41 PM No comments: